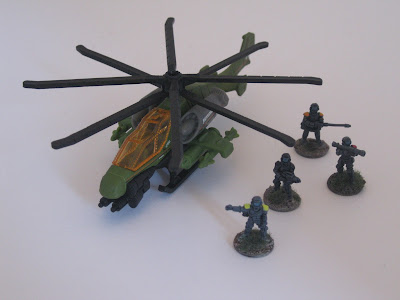 An aggressive looking attack helicopter, part of Matchbox's Sky Busters line. The design is well suited for a near future setting. The weapons load out is impressive - missiles, rocket pods, and twin chin guns. The scale might be better suited for 10mm than 15mm judging from the two seats in the cockpit. My plans are to use it to represent off-board air support for games like Tomorrow's War. It looks pretty good right out of the package. I might not even bother with a complete repaint. Covering up the markings, a quick wash, and touching up some of the details might be enough for the tabletop. 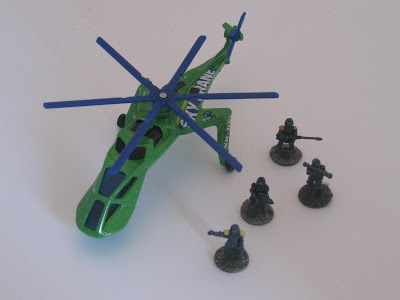 I couldn't resist picking up this cargo helicopter with the Sky Scorcher. It's also part of the Sky Busters line. The overall look fits in well with the Sky Scorcher and some of my other Matchbox aircraft. Not visible in the picture is a cargo hook between the rear landing gear. This piece is not likely to see much use on the board except as an objective parked on a landing pad. Of course, a scenario where cargo has to be moved off the board using this as model might be workable. 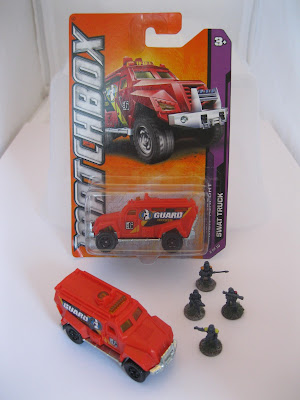 A fairly generic looking armored truck, not based directly on a real world vehicle as far as I know. A repaint in a more realistic color is definitely required before these pieces hit the table. They could be handy as battlefield taxis or vehicles in a civilian security force. Adding a weapon to the top would complete the look. 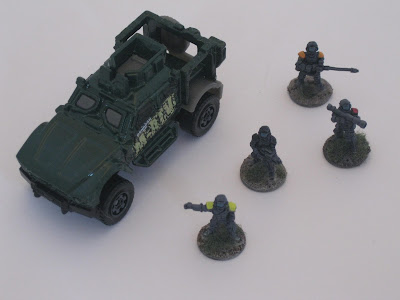 This little guy is based on a real world vehicle. The long version of the name is the MRAP All-Terrain Vehicle. MRAP itself stands for Mine Resistant Ambush Protected. Basically, its a utility vehicle armored against the kinds of conditions found in recent conflicts. The top is almost ready-made for a support weapon. There is some nice detailing, but much of it is obscured by the paint job. The doors make it a little small for 15mm modern, but a repaint would make it well suited for 15mm sci-fi gaming. 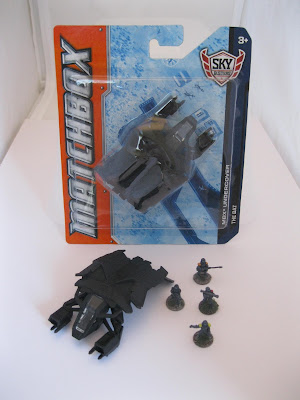 This is obviously a licensed product. Part of the Sky Busters line. The tiny seat in the cockpit looks like a very tight squeeze for a 15mm figure, but covering the canopy with paint will go a long way in concealing the scale.. A repaint could turn it into an alien gunship or armored anti-grav vehicle. The main reason I picked these pieces up was to make up for my current lack of alien vehicles. I'll have to keep an eye out of suitable flight stands.
Posted by RFord at 9:15 PM
Labels: 15mm, Matchbox