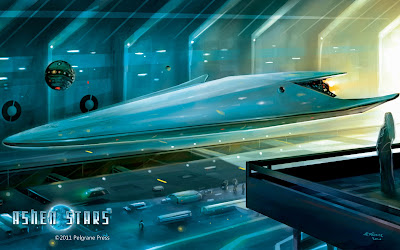 
Got mixed feelings about it.

The adventure in question is Dead Rock Seven, from the adventure collection of the same name. It wasn't my first choice. I planned on running the group through the adventures in the collection in order, but ran into issues with the first adventure - The Pleasure Bringers. The noir feel that it tries to evoke fell flat for me. Also, The Pleasure Bringers is set on a pleasure planet with human male-oriented descriptions of what pleasure is. Kind of problematic for a player character group of two female humans and an insect-like male. After wrestling with the amount of rewriting it would take to make it work for our group, I set it aside and went looking for a better option. Dead Rock Seven seemed promising. It starts with a murder mystery and takes place in a remote asteroid mining outpost. Best of all, it has a pretty straightforward structure.

I know what you're thinking. "This is the part where I read about how it all crashes and burns." And you would be wrong.

There were, however, a couple of near-misses.

The are several NPCs in Dead Rock Seven, which took some getting used to on my part. These weren't just "stay in the background" NPCs either. They all had things to relate to the player characters. Of the eight NPCs in the adventure, I only managed get six into play. One got himself killed before meeting the player characters. The other never got on stage at all, but did get a mention here and there. Of the six that got screen time, one got dropping from a potentially major role into a bit part. The five remaining NPCs did get good scenes interacting with the player characters. This points to an area that I need to strengthen as a GM. I generally don't have more than three or four "speaking role" NPCs in an adventure.

Keeping the game going was a challenge. Our group tends to be goal-oriented problem solvers with a strong tactical sense. They nearly short-circuited the adventure by driving straight for the solution. This would have left them without information they needed to resolve the climax. I reacted by throwing in a couple of things from a little later in the adventure to slow things down enough to get the information in the player character's hands.

Keeping the game short was also a challenge. Ironically, after stretching out the adventure a but, I had to shorten the end and cut short the after game wrap up to finish at a reasonable time.

Our group is starting to settle into Ashen Stars. The players are adapting elements of their more tactical play style to an investigative game. We're all still climbing the learning curve, though.

There was some good background bits presented in Dead Rock Seven that I would like to see expanded a little. The outlaw planet presented in some of the NPCs' backgrounds sounds like a good place for some player characters to find trouble.

Overall, our group is having fun with Ashen Stars. The differences between it and other games make it interesting, but also add to the difficulty of picking it up. I'm still struggling with it, but I can't put my finger on why.

I'll have to put some thought into it.
Posted by RFord at 10:24 PM
Labels: Ashen Stars, GUMSHOE, Pelgrane Press, Role Playing Game