Ashen Stars - The Witness of My Worth 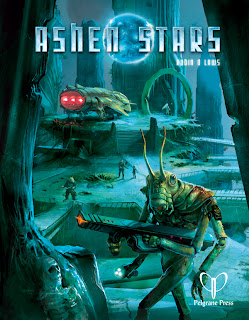 I ended up spending a fair amount of time looking for a good starter adventure for Ashen Stars. The demo offers up a taste of what the game is like, but I didn't want to kick off the campaign with it. I bought and read all the Ashen Stars adventures available to date. They were good, but not as jumping off points. I considered writing an adventure, but I didn't feel confident enough with the system. In the end, I sheepishly decided to run the adventure provided in the core book.

Yeah, I know. Core book adventures tend to be mediocre. Writing for a group that is, naturally, unfamiliar with the game means keeping things simple. The need to introduce game concepts and mechanics overshadow the things that make for a memorable game. Cunning plot twists and strong NPCs might take away from the process of learning how the game works. These assumptions, based on long experience, were why I initially didn't even consider the one in Ashen Stars. I changed my mind after reading through it while looking for ideas.

Oh, right. Robin Laws wrote this. Maybe I should have picked up on that particular clue a little sooner.

"The Witness of My Worth" did the job of introducing Ashen Stars without feeling like there were training wheels attached. The multiple ways through the adventure gave the players meaningful choices. The plot, based firmly on space opera troupes (specifically Star Trek), kept the players engaged throughout the session. Important elements of the setting were presented in a way that did not interrupt the flow of the action. Mechanics were introduced without feeling forced. The group felt challenged by a "real" adventure rather than going through "AS 101: The Keep Along the Borderspace."

The players initially had trouble getting into the mindset of an investigative game. While there are events moving in the background, there is no GM directed story to sweep the player characters along a predetermined course. It requires player characters to assert themselves over the adventure and drive it forward. Simply reacting to events doesn't work. They have to ask questions, get answers, and use those answers to determine their next step.

Likewise, the GM has to be willing to give up some control to the players. Ashen Stars is neither a railroad or a sandbox. It hands the GM a road map, shows the road signs to the player characters, and lets the players decide between the highway, the back streets, or the shortcut through Albuquerque.

I was surprised to blow through the whole thing in one session. I expected to run it in at least two sessions, since the group tends to give out after three hours. The desire to find that next piece of the puzzle kept the players going until the climax. The need to solve the mystery kept them going to the end.