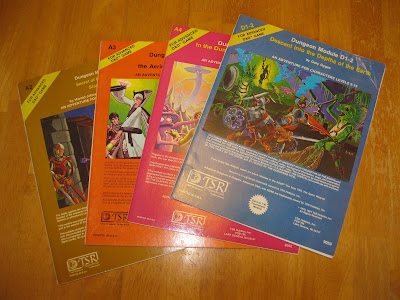 The most recent gaming finds from Half-Price. All were in fine shape - no handwritten notes, no stains, and the corners were still sharp. Which made it rather annoying when it came time to remove the price tags. Taking them off also tore off bits of the covers. Even worse, removing the adhesive that the tags left behind also damaged the covers.

Three of these modules are from the Slave Lords series. The entire series of four modules were recently republished by Wizards of the Coast in a single hardcover volume - Against the Slave Lords. I prefer the originals both for nostalgia and for ease of use. Speaking from personal experience, running a dungeon crawl is easier if the map and encounter book are separate and if both can be laid flat.

The Slave Lords series is considered a classic, but does have flaws. I found the first two modules - A1 Slave Pits of the Undercity and A2 Secret of the Slavers Stockade - to be the strongest of the series. Both are straightforward dungeon crawls with challenging encounters and memorable NPCs. A3 Assault on the Aerie of the Slave Lords suffers from being two very different adventures leading to a foregone conclusion. In the first part of the adventure, the party has to infiltrate the Slave Lords' stronghold. This is a interesting change from plowing through monsters and traps. In the second, the stronghold funnels the party through a deadly set of encounters only for the party to end up captured through the use of a deus ex machina. This renders the party's previous efforts moot. If the party is going to end up captured no matter what they do, why bother spending all that time running through the stronghold? On a meta level, the capture is necessary to set up the next module in the series, but that isn't a satisfying reason for many players. A4 In the Dungeons of the Slave Lords starts up with the party thrown into a dungeon with none of their equipment or usual selection of spells. Taking away their hard-won cool stuff in a game that is based on killing things and getting their stuff is guaranteed to annoy players. The challenge is for the party of use their limited resources to escape the dungeon. Confronting the Slave Lords and getting their stuff back is possible, but not automatic.

The other module is D1-2 Descent into the Depths of the Earth. It is part of the series that starts with G1-2-3 Against the Giants, continues with D3 Vault of the Drow, and ends with Q1 Queen of the Demonweb Pits. This series was critical in introducing the Drow and the Underdark to D&D lore. If I ever manage to get a copy of D3 Vault of the Drow, I will be able to do something I never got the chance to in the old days - running a party through the entire series.
Posted by RFord at 7:51 PM
Labels: Dungeons and Dragons, Role Playing Game