"You want to know why I slugged that guy? I literally just stepped off the dropship after a week in the bad guys' backyard. What's the first thing I see? Some numbskull with a microphone and his pet camerabot in tow. He wanted to ask me some questions. They wanted me to take a few minutes to pretty myself up for the camera. Right. There wasn't an inch of me that wasn't covered in dust, dried mud, and old sweat. I stank. The nap I took on the trip up was the first good sleep I had since the mission started. I had been gulping down prepackaged field rations in between moving, avoiding detection, monitoring targets, calling down strikes on anything that looked expensive enough to be worth breaking, and taking the odd shot at anyone stupid enough to present a target. I wanted a shower, a nap, and a hot meal."


"Of course I punched him. No, the camerabot didn't get the shot. It was too busy laughing its tin head off." 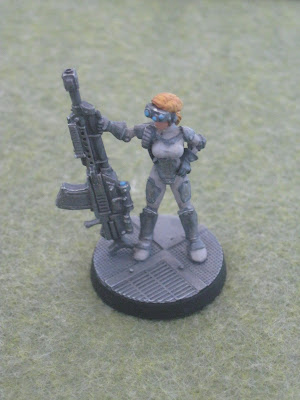 I've painted this miniature before, but wasn't happy with the results. Fortunately, it's easy to remove paint from a miniature with Simple Green, a little time, and a brush.

This time I used a lighter grey for the body suit (Reaper MSP Alien Flesh 09293) while keeping a dark grey for the armor pieces and rifle (Reaper MSP Stormy Grey 09088). The greater contrast prevents the effect from being lost in slightly dimmer light conditions. I also used metallic paint more aggressively on the armor and rifle to suggest wear (Citadel Boltgun Metal).

Some details, including the lenses on the goggles and scope, were picked out in Reaper True Blue (09017) with Reaper LED Blue (09288) as a highlight. Again, the goal was greater contrast than on the original paint job.

I tried various things with the face, but settled on a mix of Reaper Tanned Skin (09044) and Reaper Fair Skin (09047) with a wash to bring out details. Painting eyes is just something I haven't mastered yet. 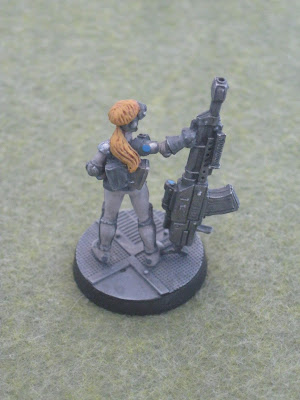 Overall, I like this attempt better than the first. The greater contrast between the different parts of the miniature brings out more the details. The contrast also has a neater appearance. It all adds up to a better expression of the concept.

Incidentally, I did take a few minutes to compare this miniature (Reaper Chronoscope 50274) with the Bones version (80021) released as part of the Reaper Bones Kickstarter Vampire Box. The Bones version comes with an integral base resembling metal plating. The detail on both miniatures are comparable, but I think the metal version looks a little crisper and better defined. That said, I'm not sure if the differences really matter once the miniatures are painted and on the tabletop.

My current plans for the Bones version of Sarah is to match her with the rest of the IMEF Marines included in the Vampire Box. This will allow them to be fielded as a squad. Right now, I'm thinking of a primary color like blue or red for the armor rather than grey.
Posted by RFord at 11:46 AM
Labels: 28mm, Chronoscope, painting, Reaper