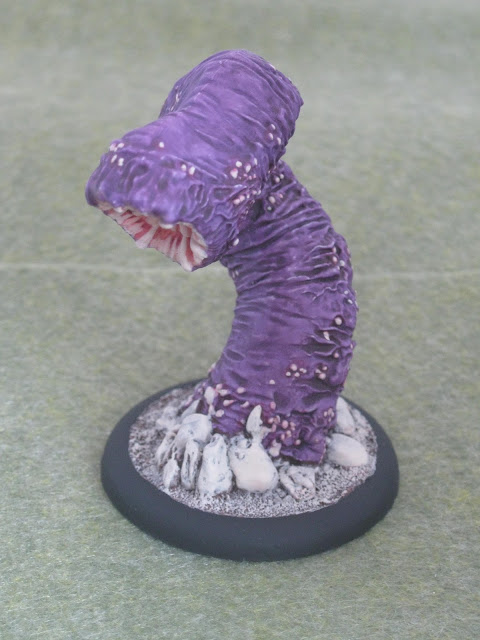 By the way, Rolf is taking a long bath in Simple Green on the recommendation of the folks on the Reaper forum. There might be something strange in the plastic mix used to make Rolf. That "something" did not react well with the Krylon spray paint I used as a base coat. I'll be exploring alternate techniques with him later, but Rolf has been pushed back in the queue in favor of other projects.

In this experiment, I decided to simply approach it like I would a metal miniature. Nothing new and nothing fancy. Just a coat of spray primer, followed by a base color, washes, and details.

The first challenge was to make Jimmy sit flat on a surface. The miniature was deformed in a way that made falling over a concern. I glued Jimmy on a 50mm plastic base from Privateer Press. The wider base made the miniature very stable, particularly after basing material was added.

The spray primer was by Design Master. It has provided a good coat on every material I have ever tried it on - metal, various plastics, and resin. Unfortunately, the smooth surface it provides is not the best for acrylic paint. The paint tends to flow rather than "hold" long enough to dry. This was not a major issue in this case, since I planned to use washes to provide most of the color on Jimmy. 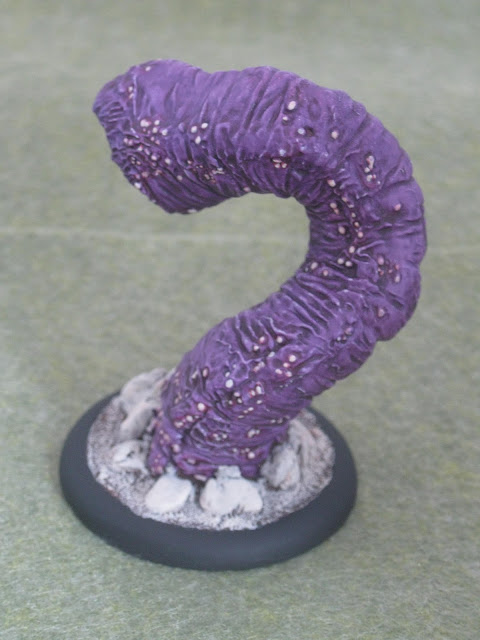 I've seen the underbelly painted a different color from the main body, but decided on a single color for simplicity. The base coat was Reaper Amethyst Purple (09024). Over that went a wash of Reaper Burgundy Wine (09025), Amethyst Purple (09024), and water. Once that was dry, I applied a second layer of wash - Citadel Leviathan Purple.

The fleshy parts of the mouth were painted with Reaper Bright Skin (09233) and given a wash of Citadel Baal Red. Reaper Graveyard Bone (09272) was used for the teeth and the rocks around the body. The rocks embedded in the body were also painted with Reaper Graveyard Bone, but with a touch of Citadel Ball Red after it dried to simulate irritated flesh.

The basing material is sand held in place by a mix of brown craft paint, tacky glue, and water. I overbrushed some linen craft paint over the sand. This gives the base a more natural appearance than a single layer of color could. The outer edge of the base was painted black.

The final step was to seal the miniature and base with Testors Dullcote.

Overall, I like how it turned out. The whole process was free of problems. One surprise was the level of detail. The white of the unpainted Bone material seems to obscure the figure even on close inspection. The washes brought out the more subtle features. Even the coat of gray primer allowed me to pick out more details than before.
Posted by RFord at 12:07 AM
Labels: 28mm, Bones, painting, Reaper