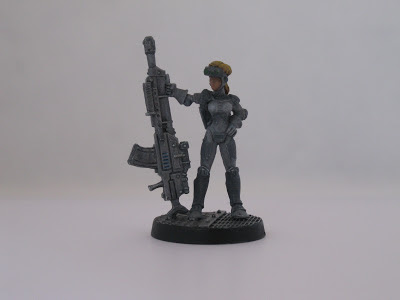 This one almost got filed under Learning Experiences rather than Painting By Numbers.

I'm not sure if I like how this mini turned out. What I learned made it worth the effort of painting. I'm just not sure if it looks fine, could use a little more work, or needs a soak in Simple Green.

This is "Sarah Blitzer, IMEF Sniper" from Reaper's Chronoscope line (50274). The model is clearly based on the "female long ranged soldier/assassin/spy" that shows up in sci-fi shows and films from time to time. The rifle is huge. The armor is skintight. We all know what's going on here. Let's just move on.

The miniature is of good quality. The mechanical details on the rifle and armor are sharp and well-defined. A little work with a hobby knife took care of the small amount of flash. There is an annoying seam line on the top of the head. It blends into the hair at some angles, but is glaringly viable at others. I left it alone, but it's getting some time with a file if I decide to strip and repaint the figure.

It will be interesting to compare this metal model with the plastic version in Reaper's Bones Kickstarter. I'll follow up on that next year.

The base is from Champ Industries. I've been really happy with these from beginning to end. The service was prompt and efficient. The fact that these are plastic rather than resin meant that there was no clean up and no pinning required. Just a couple of drops of superglue and I could move on to priming. The detail is excellent and takes drybrushing well.

My paint job was inspired by the character Nova from Blizzard Entertainment's Starcraft setting. The model was primed with grey auto body primer. The body suit got a shade of medium grey (Citadel Codex Grey). The armor pieces and rifle got a darker shade of grey (Reaper MSP 09088 Stormy Grey). And a light shade of grey (Reaper MSP 09090 Misty Grey) was used as a highlight. A slightly diluted dark wash (Citadel Badab Black) was used to bring out the details. The rifle and base were drybrushed with a darker metallic (Citadel Boltgun).

Overall, I like the effect, but it might be too subtle. It stands out in good lighting, but it gets lost in darker conditions. What I'm tempted to try is using a light grey for the body suit while keeping the dark grey for the armor to enhance the contrast. I could use white or a white-light grey mix as a highlight.

I would also like the details to stand out a little more. The green on the goggle lenses is barely viable except on close inspection.

The hair came out well. I base coated it with a nice blond color (Reaper Master Series 09074 Palomino Gold) and hit it with a medium wash (Citadel Ogryn Flesh). A little more Palomino Gold was applied as a highlight.

What I'm really not happy with is the face. The skin came out alright, but I'm just going to have to learn how to paint eyes for Reaper's female figures. They just don't look right without that detail.

I'm still not sure what I'm going to end up doing with this mini. It's good enough for tabletop as it is, but I feel that I can do better with another attempt. For now, I'll just set it aside and get some work done on other projects.