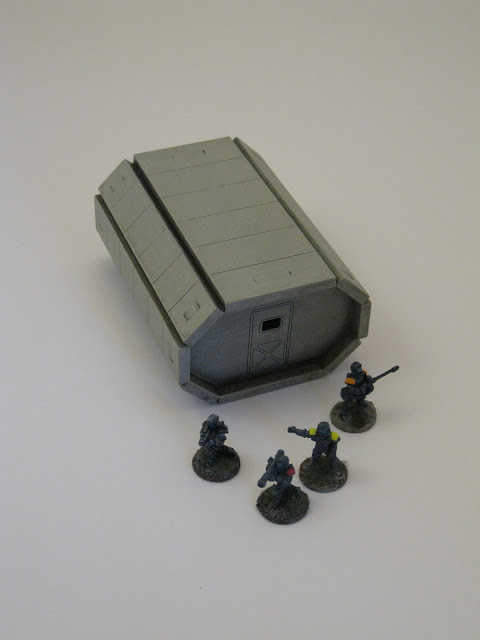 I picked up three of Gamecraft Miniatures' 15mm scale MDF terrain pieces during one of their recent sales. The ones I purchased were made for Ambush Alley's Tomorrow’s War game. That said, there is nothing so distinctive about these pieces that they can't be used for any futuristic game.

This particular piece is a Small Cargo Module (15MTW031). Not being familiar with assembling and painting MDF, I decided to use it as a test piece before working on the other two (which will be seen in a later post).

The piece came unassembled in a plastic bag. I noticed a strong, smoky smell immediately after unsealing the bag. This is to be expected as the parts are laser cut wood. It wasn't unpleasant, but the smell was still noticeable days after taking the parts out of the package.

Assembly was straightforward. Test fitting revealed that the parts fit together well. The piece went together quickly and without a struggle. I used super glue to hold the parts together during assembly. After the super glue set completely, I applied watered down craft glue to the seams to strengthen the piece and to seal any gaps.

Although it is called the Small Cargo Module, the piece is a good size for a terrain piece. It is big enough to provide cover, influence maneuver, and effect lines of sight. It is also small enough to be added in without dominating the board or getting in the way as players move and measure.

The assembled piece is very durable. It survived getting knocked off my desk without damage. This piece should survive years of gaming with nothing more than touching up the paint. 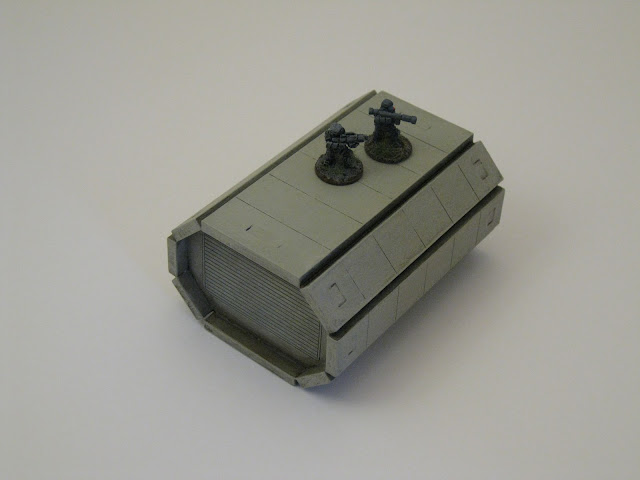 Painting took longer than I expected. Online research suggested that priming would not be necessary and that the best approach would be multiple layers of thinned paint. The MDF absorbed the initial layer while barely changing color. It ultimately took four layers until I was happy with the coverage of the basecoat.

My initial concerns with filling in the laser etched details on the piece proved unfounded. The etching is deep enough not to be effected by the layers of thinned paint. I did apply some Reaper Black Wash (09255) over the etching to being out the details a little more, just in case.
The next step was highlighting. I gently brushed on a thinned down linen color over the medium gray basecoat. I paid particular attention to the upper edges where light would catch on a real structure.

I'm pretty happy with the piece. Its price is offset by its quality, durability, and utility. It would not look out of place as part of a near-future location here on Earth or in a far-future space colony or industrial world.
Posted by RFord at 12:12 PM
Labels: 15mm, Gamecraft Miniatures, terrain, Tomorrow's War