Been making some progress on my pile of unpainted miniatures and unfinished terrain projects. 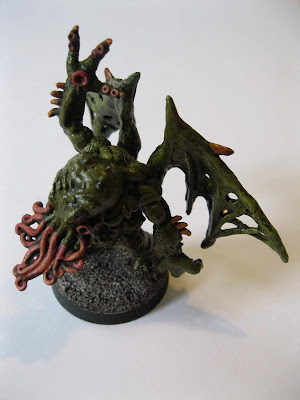 This particular project has spent time on and off my work table since I received it with the rest of the original Reaper Bones Kickstarter's backer rewards. The initial plan was to use this miniature to test a paint scheme to eventually use on its much larger cousin. That fell through when I couldn't find a way to produce a satisfactory green. I tried various combinations of base colors, highlights, and washes over the years. Nothing came out quite right until recently.

The key, it turns out, is Baby Poop.

But more on that later.

"Eldritch Demon" isn't the most accurate name for this friendly fellow. "Eldritch" is fair, given its obvious Lovecraftian inspiration. "Demon" isn't really descriptive of an extraterrestrial being, though. Fortunately, there is a wealth of alternatives:

The results of my previous attempts formed a dark green-brown base for me to work with. The original primer/base coat is FolkArt 869 Glass & Tile Medium with a little brown paint. That coat is buried under multiple layers of paint, washes, and failure. Couldn't complain about lack of coverage, though.

I hit the raised areas with FolkArt 527 Forest Moss. Some might question the use of a craft paint, but I had a couple of reasons:

Next came Secret Weapon W008 Baby Poop Wash. I purchased this stuff back on Black Friday/Cyber Monday. This is my first experience using a wash from Secret Weapon. The wash flowed smoothly straight out of the bottle, coating the whole miniature without breaking and setting into the recesses on its own. The finished glaze is glossy enough to suggest wet or slimy flesh on close inspection. The green-brown-orange color was just what I was wanting for a tentacled horror not made of ordinary matter.

The claws and bony spurs are a base of P3 Morrow White and a wash of Army Painter Strong Tone Quickshade.

The tentacles and suckers are a base of Reaper 09183 Cloud Pink and a wash of Secret Weapon Dark Sepia Wash.

The eyes are a base of P3 Morrow White and a wash of Citadel Baal Red that has somehow survived years of storage.

The base was finished in my usual way:

I'm pleased at how this project turned out. I'm also happy to be able to put the finished miniature in my display case and move on. It will emerge to menace some player characters soon enough.
Posted by RFord at 6:00 PM
Labels: 28mm, Kickstarter, miniature, painting, Reaper, Secret Weapon Miniatures