This is a test batch of some Titan Marines Infantry by Rebel Minis. I felt the need for more sci-fi 15mm infantry to use as OPFOR and these guys won out over the alternatives. The stosstruppen look really sold me. Sometimes there is a need for OPFOR that dress the part.

I was very pleased with these guys when they showed up in the mail. Order fulfillment was fast. The details are good and there are a variety of poses. The mold lines were easy to deal with. The integral bases were small, but I was planning to glue them on washers anyway.

Picking out a color scheme was tough. There was the neo-samurai scheme with blood red armor plates over blue cloth. (I might revisit the idea for a command or elite unit.) A desert camouflage scheme which would have been khaki with a brown wash. (Dull.) A jungle camouflage scheme which would have been olive drab with a brown wash. (Dull.) I even considered a "Space Imperium" sturmtruppen scheme with white armor plates over black cloth. (Funny for awhile, but the joke would get real old, real quick.) 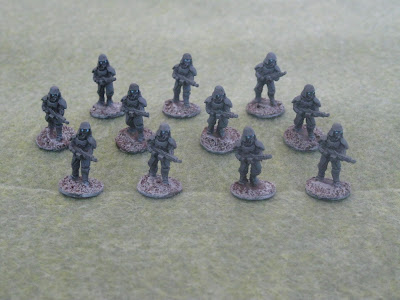 In the end, a quick, efficient scheme for batch painting made the cut. A dark grey primer was followed by a coat of Reaper Stormy Grey (09088). Over that went a coat of Citadel Badab Black Wash. The wash shaded the figures and brought out the details, but that was secondary to darkening the grey base coat. The lenses were picked out with Reaper LED Blue (09288). The basing was my usual sand/paint/water mix drybrushed with a sandy color. The figures got a layer of Testors Dullcote after everything had a day to dry.

This scheme will end up being the standard for my Titan Marine infantry collection. It looks good and is practical for production-style painting. Now I just need to get the rest ready to paint.
Posted by RFord at 10:37 PM
Labels: 15mm, miniature, painting, Rebel Minis, Titan Marines